On an absurdly cold April Fools Day of 2011, the juggernaut Phillies, the most talked about team in baseball, were down 4-2 in the bottom of the ninth against an eventual 100 loss team in the Houston Astros. Roy Halladay, who was deemed the team’s ace of aces, surrendered only one earned run on an RBI groundout through six innings.

Former Phillies Opening Day starter Brett Myers surprisingly bested Halladay as the Astros’ first man out and even laid down a bunt to set up two runners in scoring position who eventually crossed home plate to score in the top of the seventh.

Fast forward to the dramatic finish. All Jimmy Rollins had to do in the bottom of the ninth was get on base. He got a pitch from “closer” Brandon Lyon on the hands and hit it through the hole in on the right side for a base hit. And while the conditions were right for Ryan Howard to hit a game-tying home run (the wind was blowing to the right), the big man grinded out a tough at-bat and lined a single up the middle.

Two batters later, Ben Francisco registered the third single of the inning for the Phillies, scoring Rollins. Next up was Carlos Ruiz and after nearly winning the game on what would have been a double that was rightly called foul, Chooch fought off a 1-2 count and got a ball to the outfield. The bases were loaded for Wilson Valdez.

You guessed it, he singled. Unlike the hitters who came before, Valdez jumped on a high pitch. Since the ball was hit hard, only one runner could score. That meant pinch hitter John Mayberry Jr. had the chance to win it with the bases loaded and one out.

On a 2-2 count, Mayberry smoked a ball over the center fielder Michael Bourn's head to claim the Phillies’ first victory. Only 101 more to go. 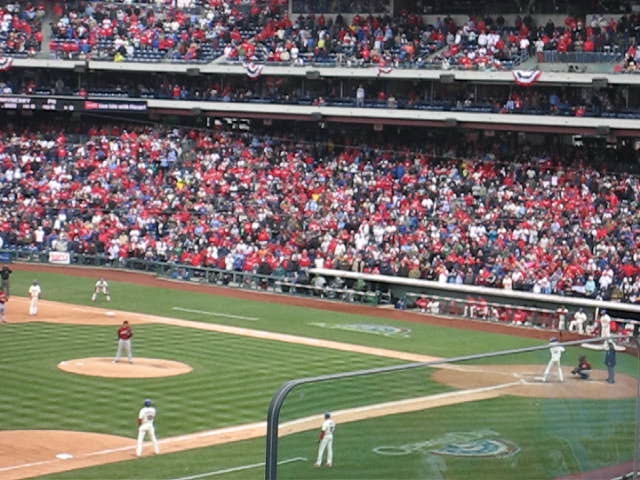