Should the Phillies wear this uniform? 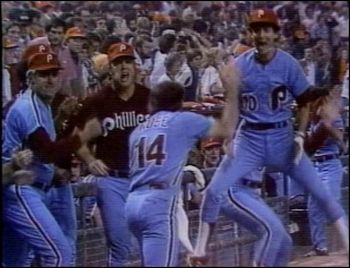 Tuesday we asked if the Eagles should return to their Kelly green roots of their last NFL championship in 1960, now, should the Phillies go back to power blue, the road uniform worn when they won their first World Series title in 1980?

Let us know what you think at: info@proleagueauthentics.com

Authentic Store Buzz: Plenty of new products have arrived including (pictured above, left to right) the Nike purple Ray Lewis Ravens Elite Jersey, Dallas Cowboys adjustable draft hats, and a couple of nice Cooperstown Collection caps for the Phillies (1918 and 1935) and Pirates (1977 black).

Please join us at our Center City Philly store tomorrow as we welcome former Philadelphia Atoms soccer goalkeeper, and current Philadelphia Union broadcaster Bob Rigby to meet with fans, talk some soccer with the MLS all star event at PPL Park next Wednesday night, and sign autographs from 11:30-12:30.

Rigby, a Philadelphia-area native who played collegiately at East Stroudsburg, helped lead the Atoms to the 1973 North American Soccer League Championship in his and the team’s rookie season, appearing on the cover of Sports Illustrated, as the Atoms were the first U.S. team in any sports to win a professional championship in its first season.

We’ll have a reprint of the SI cover (first soccer player on the cover) for Bob to sign.  Hope to see you at out store.

Meanwhile…if you live in the Philadelphia metro area, you may have heard a radio spot promoting Miller Beer’s ‘Throwback a Throwback’ campaign to enjoy a cold beer at a specific  favorite sports bar while also having a chance to win a great-looking Phillies (the team’s not named in the ad) throwback jersey.

Authentically Speaking Trivia Time: What year did the Phillies put player’s last names on their uniforms?  Answer on Thursday.

Here’s what happened:  The Vikings came into the league in 1961, and in their second season began wearing purple pants on the road with a white jersey.  By ’64, the team wanted to show the home folks at Metropolitan Stadium the road look, but someone forgot to tell the Lions to come in blue for that road game in week five of the season, so it was white versus white until the break between the first/second quarters.

The rest of the game the Vikings wore all-purple, something they wouldn’t do again for 43 years until a Monday Night game against Chicago in December 2007.