Should the Eagles wear this uniform? 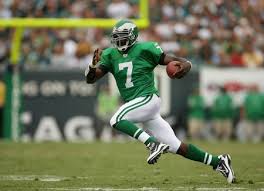 After a return to Kelly green and gray eagle stripes on the helmets for the 2010 season opener against Green Bay (as pictured above), part of the team's 50th anniversary celebration of the 1960 NFL title over the Packers at Franklin Field, there was a lot of sentiment from Eagles fans to return to that look.

Recently, after public disclosure of the marital split between Eagles owner Jeffrey Lurie and his wife Christina, fans have wondered aloud about a change back to Kelly green citing Christina Lurie who personally preferred the 1996 switch to midnight green with black as an accessory color.

What do you think?  Email us at info@proleagueauthentics.com

Authentic Store Buzz: We’ve received a lot of positive feedback from folks who are going tos top by our next in-store event this Thursday, July 19, as we welcome former Philadelphia Atoms soccer goalkeeper, and current Philadelphia Union broadcaster Bob Rigby to our Center City Philly store meeting with fans and signing autographs from 11:30-12:30.

We’ll have a reprint of the SI cover for Bob to sign.  Hope to see you at out store as again the soccer community in the Philly region will be alive with the MLS All Star match the following Wednesday, July 25.

If you live in the Philadelphia metro area, you may have heard a radio spot promoting Miller Beer’s ‘Throwback a Throwback’ campaign to enjoy a cold beer at a specific  favorite sports bar while also having a chance to win a great-looking Phillies (the team’s not named in the ad) throwback jersey.