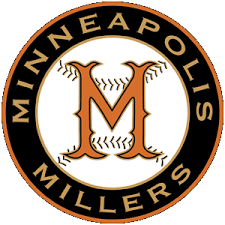 The multiple throwback looks in the MLB season continues this weekend with not only  the “1979” Tampa Bay Rays against Detroit, but also at Target Field where the Twins host Kansas City in a day/night doubleheader Saturday.

In the evening game they’ll honor one of the greatest baseball legacies in the state’s history, the American Association  Minneapolis Millers who played almost completely uninterrupted from 1894-1960, the year before the Washington Senators moved to Minnesota bringing major league baseball and the Twins to Minneapolis-St. Paul.

The Twins will wear 1951 Millers uniforms, complete with snazzy looking hosiery, while the Royals will transform into the Kansas City Blues.

The Blues uniforms were common for the era they were simple, gray with black lettering.

Authentically Speaking trivia time:  In 1973, the Pittsburgh Pirates honored the memory of Roberto Clemente, who died in a plane crash on Dec. 31, 1972 while on an aid mission to Nicaragua, by wearing his number 21 as a jersey patch for the season.  This was the first time a team wore a player’s number in memoriam.

Who was the second MLB player to have his number worn in a similar fashion?  Answer on Wednesday.