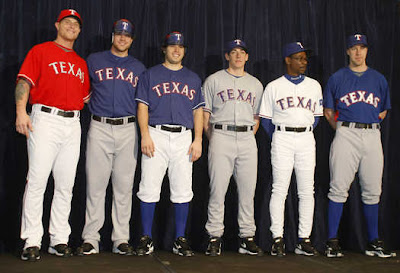 A couple of weeks back we wrote about the MLB teams that wear their city name on the front of the jersey at home such as Miami (except when they wear the orange jersey at Marlins Park that says “MARLINS”) and Texas.

Well, as part of their throwback games this season celebrating the team’s 40th anniversary in Arlington, the Rangers went retro to 1986 Saturday night hosting the Astros (who are themselves throwing-back at various points this season to celebrate their 50th anniversary), and the Rangers like in ’86, wore “Rangers” across the front of the jersey at home for the first time since 2008.

We could never understand why they couldn’t have kept “RANGERS” (as shown above, right) in the new larger letters on the white jersey in 2009, while staying with “TEXAS” on the blue and red jerseys, but then again, it’s Texas, a state as proud as any of making sure its brand name is exposed, so perhaps the Rangers are simply following suit.

The Astros went along with the fun Saturday (and get ready for 18 meetings between the two Texas clubs in 2013 as A.L. West neighbors) donning a mismatch 1986 jersey that had the correct non-belt waistband, but the incorrect non-button jersey.

1986 was identified by the Astros 25th anniversary patch on the left sleeve, a patch that was alternately worn with the 1986 All-Star Game patch, and usually more often than not after the all star game was played that season, but the ‘Stros did wear both patches in their epic six-game N.L. Championship Series loss to the Mets that season. Both patches, originals, are shown above.

MLB’s Father’s Day ‘Home Run Challenge’: The blue uniform decals and blue wristbands worn by all on field personnel Sunday around the big leagues was symbolic of the united fight against prostate cancer, part of the league’s commitment to helping to raise money for continued research.

From trainers to umpires; from players and coaches to groundskeepers, each wore a ribbon decal with the MLB logo attached to the upper left chest area of their jersey/shirt, and a wristband.