The game in which a team wore three different uniforms 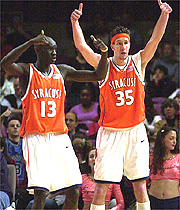 Hard to believe but true, that in one game the Syracuse university basketball team wore three different uniforms, and we were there to witness it.

It was the nondescript semi-finals of the 2002 post-season National Invitation Tournament at Madison Square Garden, the then-Orangemen against South Carolina.

The problem became apparent before tipoff when the referees met the team captains at midcourt and discovered that under the warm-ups, both teams were wearing their home white jerseys and shorts.  Apparently, both teams had been mistakenly told they were the home team and would wear white, and South Carolina didn’t even bring its road jerseys to New York.

Immediately, a Syracuse manager was ordered back to the team hotel and received a police escort for the 15 blocks back up to midtown Manhattan to fetch the road uniforms, but the game got underway with plenty of confusion, and an audible buzz from the crowd.

About the only basic difference to separate the teams were the orange trim for Syracuse, and the maroon for the Gamecocks.

Just under three minutes into the game, the manager came out of the tunnel with the bag of orange jerseys, a media timeout was called and the Syracuse players slipped on the orange tops courtside resulting in the look pictured above, the second uniform combination of the night.

In the locker room at halftime the Orangemen made the change complete putting on orange shorts, their normal road game uniform, and took the court for the second half in their third different look of the game.

In recap, Syracuse wore all white for the first 2:41 of the game.  Orange jerseys and white shorts for the remaining 17:19 of the half, then all orange for the entire second half,

Oh, and the uniform snafu didn’t help Syracuse, they lost the game 66-59.