Men in Black, Part I 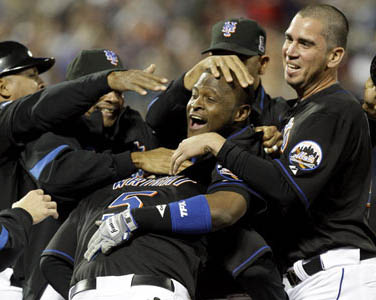 First of all, this was to be an afternoon game, a day to celebrate the great career of reliever John Franco, the second most tenured player in the team’s 51-year history, with his induction to the New York Mets Hall of Fame.

Oh, the 35 minute ceremony was held prior to the game, but with the ESPN/MLB TV deal calling the shots, it was moved to the Sunday night slot as the Mets and Cardinals wrapped up a historic (the first Mets no hitter pitched by Johan Santana Friday night) three-game series, with the Mets wearing black jerseys for the first time this season.

The black was an ode to Franco who pitched in Queens between 1990-2004.  His tenure overlapped the period in which the Mets began wearing black jerseys in 1998.

And the winner is… From last Thursday’s note about the Twins wearing the “M” hat in Cleveland for this past weekend’s three-game series because they have been winning of late with it replacing the TC hats.

We put out the question which jersey would the team wear on the road with the cap, and guessed incorrectly that it would be the blue jersey with “Twins” on the front because that font matched the “M” on the cap.

The end result; the Twins took two out of three from the Indians, and play in Kansas City Monday night.  Their 20 wins are fewest in the American League, the Cubs and Padres have only won 18 games in the N.L.