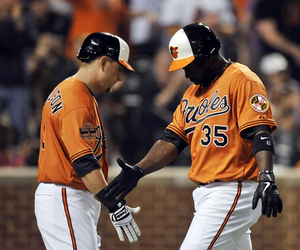 It’s amazing with all of the jerseys MLB teams have at their disposal, tied in with the fact that some teams have weekly rituals when it comes to specific jerseys worn on specific days, it’s not surprising that in the 15 weekend series played the past three days, only two series had both teams wearing the same jerseys in all three games.

Only two match-ups!  Any guesses?

Believe it or not, Cubs at Brewers and Rockies at Dodgers are the only series.  The Cubs wore gray and the Brewers their blue “Brewers” alternate all weekend at Miller Park, and the Rockies wore gray (with the same black hat with purple bill) and the Dodgers, of course, white, at Dodger Stadium.

Other weekend notables; the Red Sox wore red, and so did the White Sox (with the recently added Moose Skowron memorial patch).  The Giants wore their ‘80s road throwbacks, and of course the beautiful throwback game in Arlington, Tex. Saturday as the Angels and Rangers went 1972, in this the 40th anniversary of the franchise in the Dallas-Fort Worth Metroplex.

And, don’t remind us, even though the Marlins had two chances to wear the orange hat over the weekend, wearing orange jerseys twice against the Mets, they remain all-black cap, all the time after 34 games.

Authentic Store Buzz: Speaking of the aforementioned White Sox in red, as they’re wearing 1972 home throwbacks this season, there’s a “scarlet” version of matching batting practice shirts and light jackets in which orders can be taken by contacting the store directly.

The Nationals will be wearing 1924 Senators throwbacks in a game against the Giants who will also be wearing throwbacks over the July 4 holiday.  Again, please contact the store for more details.

We Have a Date:  Please note Saturday, July 28 (exact time TBD-early evening) for the third of PLA’s four part series “Jerseys as Art.”  This will be a much anticipated event featuring MLB Game Worn Jerseys of the Double Knit Era author Bill Henderson.

Bill will be on hand to celebrate the release of the latest (2012) edition of his must-have, painstakingly detailed compilation of modern MLB baseball jersey information.  The last release of Bill’s work was in 2009, so we’re looking forward to his presenting this update to our attendees in July.