The Birth Of Hockey In Philadelphia 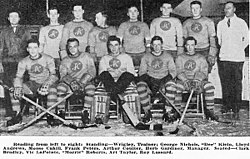 Before Bernie Parent and Bobby Clarke brought the Flyers to the promise land, there were a few other hockey teams that played in the City of Brotherly Love. The first of these teams was the Philadelphia Arrows. The Arrows played their games at the Philadelphia Arena at 4530 Market Street in the Canadian-American Hockey League.

The Arrows would actually stymy the NHL's first attempt to bring a team to Philly. In 1930, the Pittsburgh Pirates moved to town to become the Philadelphia Quakers. The Quakers only lasted one season, going 4-36-4, and were outdrawn by the Arrows as well.

If you want to rep the hockey teams of yesteryear then Shibe has you covered! We have both Arrows and Ramblers tee's, as well as the Firebirds and Blazers!